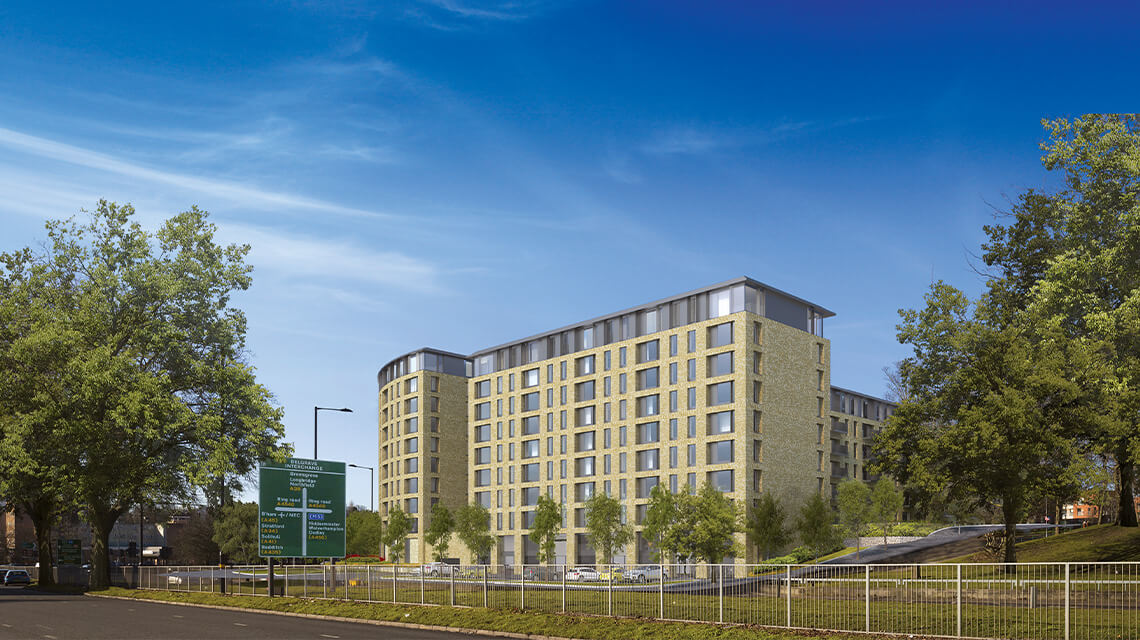 Situated in Britain’s second largest city and incorporated within the largest urban renewal scheme of anywhere in the UK outside of London, the Roosevelt Apartments in Birmingham offer an unmissable opportunity to invest in contemporary city homes in a world-class destination.

With HS2 set to transform country-wide travel and extensive regeneration projects aiming to create new public and commercial realms throughout the city, Birmingham is certainly proclaiming itself as one of the UK’s most progressive destinations; proving that there has never been a better time to invest in this West Midlands hub.

Park Central comprises more than 1,300 properties across 61 acres, making it one of Birmingham’s most extensive residential projects. Only 15 minutes’ walk from hotspots including The O2 Academy, Birmingham Hippodrome and The Mailbox, this once overlooked spot is now emerging as the city’s most attractive residential enclave. Park Central’s potential and success have been acknowledged by various property commentators, winning various accolades including ‘Development of the Year’ at The Sunday Times British Home Awards, ‘Best Regeneration Project’ at the Housebuilder Awards and ‘Best Starter Home’ at the WhatHouse? Awards in 2014.

Part of this vast development’s final phase, the Roosevelt Apartments are an outstanding collection of 76 one and two bedroom apartments designed with the modern city dweller in mind. With Help to Buy, this is a fantastic opportunity for both first-time buyers and Buy-to-Let investors looking for their next venture.

Find out more information about Help to Buy here.

Rewarding Rental Yields and the Prospect of Capital Growth

With the cost of living around 60% lower than London - less than one hour and a half away by train, or 49 minutes once HS2 is up-and-running - Birmingham is set for a bright future ahead as it continues to attract new residents and investors, and reward them in the process. Rental yields at Roosevelt are estimated to reach 5.81% whilst property prices across the city are said to have surpassed the UK average. According to property market auditor Hometrack, Birmingham is joint second with Leicester for the highest rate of property price increases in the UK, demonstrating a 7.7% rise in homes between April 2016 and 2017; up from 6.9% the previous year.

Offering a choice of two specifications which vary between floor levels, purchasers will be able to choose a style that suits them, whilst a range of in-build facilities and readily designed interiors will flawlessly set the tone for modern living. The apartments will spread across eight storeys, providing exceptional city views from the upper levels, whilst at ground level there are communal courtyard gardens setting the scene with an exclusive, peaceful ambience, despite the development’s incredibly central location.

Each apartment will boast a Juliet door feature within the principal living area, inviting in copious amounts of fresh air and natural light, whilst a neutral colour scheme will exude sophistication and provide a blank canvas for residents’ own personalisation. All bedrooms will feature fitted wardrobes, whilst the two bedroom apartments will enjoy the added bonus of an en-suite shower room to the master bedroom.

Naturally, each home will be both energy-efficient and high-tech, demonstrated by fixtures such as low-energy LED downlighting, double-glazed windows and top-of-the-range Bosch integrated kitchen appliances. Other stand-out specifications will include designer kitchen units and bathroom accessories, with notable brands including Paula Rosa Manhattan, Roca and Hansgrohe decked throughout the properties.

City Life at Your Fingertips

Situated amongst Park Central’s eight acres of beautifully landscaped grounds, residents of the Roosevelt Apartments will enjoy an oasis of tranquillity whilst being a convenient walk away from a variety of local amenities, social hubs, major nightlife venues, business centres and transport services.

So much is within easy reach of the Roosevelt Apartments. Hop on a bike and you’ll reach Birmingham’s renowned Bull Ring shopping and leisure centre, China Town and the famous market district, Jewellery Quarter, in approximately six minutes. For journeys direct to London Euston, Birmingham New Street station is just 15 minutes’ walk away.

Home to three established universities, Birmingham is also largely regarded as a student city. The University of Birmingham’s campus ‘The Vale’ is around a 10 minute bike ride from the Roosevelt Apartments, whilst the city centre is overflowing with opportunities to enjoy its culture and creativity.

Halfway between Coventry and Wolverhampton, Birmingham is the central transport hub in the West Midlands, providing journeys up to Edinburgh through to London Euston. Whilst HS2 will certainly take this city’s status to an unprecedented new level, Birmingham’s connectivity is currently incredibly vast and accessible to cross-country destinations.

Birmingham also caters to road commuters with four motorways encircling the city, including the M5, M6, M40 and M42. If that wasn’t enough, Birmingham International Airport is just a 25 minute drive from the Roosevelt Apartments; perfect for business trips and weekend getaways.

The Roosevelt Apartments have now sold out! Explore our range of flats for sale in Birmingham and contact our team for more information,